skip to main | skip to sidebar

Turtle Bend Farm is a sustainable vegetable farm in Polk County, Georgia. Adam and Mecca Lowe are growing vegetables on approximately 7 acres of family farmland using ecological methods without the use of synthetic fertilizers, pesticides, fungicides or herbicides. Our goal is to produce clean, healthy, fresh vegetables for our local communities while protecting and enhancing our local natural and social resources. 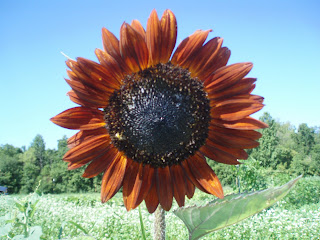 Sometimes there are opportunities to stand up for something that you believe in. We recently had one such chance at one of our local farmers' markets. We thought that the Powder Springs Farmers' Market would be a good place to bring our vegetables and meet folks in our area including other farmers. Well, it was a good place for some of those things, but we soon realized that the market was not keeping their end of the bargain. The farmers' market is operated by a board and a market coordinator. They set their rules at the beginning of the season and all vendors signed an agreement to follow the rules. Among their rules is a restriction on selling produce that was not grown by the vendor- wholesale produce. It's the same stuff you would find in the grocery store- these vendors go down to the Atlanta Farmers' market where other wholesalers are selling commercially grown produce from around the country and the world for dirt cheap. The re-seller then takes this produce to a local farmers market, gussied up with bushel baskets and a thick southern accent- oh, and don't forget the boiled peanuts, and hocks his wares for cheap and makes a killing off of unsuspecting customers. "Oh yeah, I grew ALL this stuff- best watermelons you've ever tasted- just put them on the truck last night." You can hear the lies echoed through the farmers market parking lot. One customer recently found a "grown in the USA" sticker on this wholesaler's "homegrown" cantaloupe. Well, many farmers markets around Atlanta have wised up to ol' vegetable hockin' Joe and have created rules that prohibit this practice. The Powder Springs Farmers Market has some similar rules on their books- with a few exceptions, or loopholes as you might call them. You see, several board members for this market are from the local Merchants' Association, and they have one goal- to increase the downtown foot-traffic in order to increase patronage in their stores. They want as many vegetables as possible all season long, even when the vegetables are out of season- like tomatoes in May, or watermelons for the 4th of July. Vendors who resell are supposed to post a sign that the items is not grown by them, and the items must also be Georgia grown. But instead of enforcing these rules that would help keep the market fair, the board just looks the other way and allows the rules to be broken. The result? Rampant wholesaling, lying vendors, and the "real" farmers get undercut by the low prices of resold vegetables. Well, we brought our complaint about the lack of enforcement to a member of the farmers market board. He not only refused to enforce the rules, but threatened to call the police if we came to the market and caused a "disturbance." He didn't appreciate our point of view to say the least. Somehow, because he was in a "volunteer" position, he was not responsible for enforcing the rules they had laid out. It is our belief that in these types of situations, a long lost tool called "social accountability" must be resurrected. Somehow it is offensive to hold someone accountable- he even threatened legal action if we went public with this- well here ya go sir- no, I won't print your name, but it's pretty easy to figure out who's on the board that's not a farmer.
What has happened to community values? Why must everything be rationalized along economic lines? Can't we understand that a constant predisposition towards "earning a buck" is not what's best for our society? I hope that anyone who reads this will take seriously their position as community members, as people in society, and live with integrity, honesty and claim some values and stand by them! Contrary to what Mr. Merchant board member or Mr. Lying wholesaler think- it's OK to believe in something and stand up for it. So, we will no longer be selling at this unfair and corrupt market- I hope that customers of this market will get to know their produce vendors- a few bad apples can spoil the bunch in this case. I would tell you, like I have before, to ask the vendor if he or she grew their produce, but in this case, you would have gotten a bold faced lie. If we are going to change our food system then we have to stand up for the values that it must represent- honesty, transparency & sustainability for starters. If farmers' markets begin to sell the same food that is available in the grocery store, then we have not really changed anything- "local" and "natural" become just a marketing scam. If local food networks are to be more meaningful than the conventional food system, then consumers must begin to gain more knowledge about agriculture and food so that they can hold farmers and vendors accountable. Likewise, farmers may need to raise their expectations of consumers. Perhaps there should be more than just a monetary transaction over food? Should consumers be more involved in farming and food so that they form closer relationships with farmers? I don't know the answer, but I know that sometimes you have to look closer to understand the difference between a scam artist and a hardworking farmer.
Posted by Turtle Bend Farm at 7:26 AM 2 comments: Links to this post

Man this summer has absolutely flown by. I'm not saying it's over- but there are signs that the seasons- both cultural and ecological- are changing. Kids are going back to school, we are ordering our fall seeds like crazy, and some of our summer crops are winding down. The tomatoes will soon give in to the late blight, cucumbers succumbed to the powdery mildew (although we have another succession coming on), but the green beans keep rolling! We are harvesting some of the most beautiful french green beans I have ever seen! Adam has been working really hard to help all of our crops along- weeding, watering and most importantly- harvesting! We are also beginning to see the first of our okra!! We have the traditional clemson spineless variety, a slender burgundy variety, and a fat hill country red variety. Our silverqueen corn is almost ready- begging for rain!! We also have another crop of black-eyed peas maturing. We will have some red ripper peas very soon- they are nice and plump and pinkish in color- if you like peas you will have to try them.

As a part of our efforts to support ecological diversity on our two cultivated acres of vegetables, we have strategically planted buckwheat in rows between winter squash, around the second succession of summer squash, and anywhere in general with open ground. We use the buckwheat as a cover crop and it is useful for several reasons. The first is that it is fast growing, shading out other weeds. Second, it produces a nice head of small white flowers that attract THRONGS of bees and wasps which are beneficial insects- they help polinate plants and some of them will actually eat other bugs, like squash bugs, that like to eat our crops. THere is a serious vibration of bees going on early in the morning in the rows of buckwheat- I will post a picture of this soon. We are going to mow down the buckwheat before it goes to seed and leave it as a mulch for our winter squash to grow on.

We are still gearing up for our fall vegetable subscription. I will be sending out an email to all of the folks who have shown interest or signed our email list at the farmers' markets over the past month. We will start our subscription during the first week in October and it will run for 10 weeks until the first week of December. If you are interested in receiving a weekly box of organic vegetables this fall, please contact us as soon as possible to be considered. We only have room for about 25 shares, so space is limited. We will be serving our surounding area- including Dallas, Powder Springs, Rockmart and anywhere in between. We need to have a cluster of customers for each delivery location so tell your friends!! See the previous post for a list of the vegetables that we will be growing.

We hope that all of you continue to visit the farmers markets as the seasons change. There is no reason that most of the farmers markets should have to end anytime soon- we will continue to produce food for several more months!! Come say hello to us at the Dallas Farmers Market in the historic downtown every Saturday morning between 8am & 11:30. We are also regulars at the Powder Springs farmers market in historic downtown Powder Springs on Thursdays from 4-8. The farmers markets are alot of fun because they offer a variety of products in addition to vegetables, such as baked goods and honey. Both markets also have live music on some days. In Dallas we have enjoyed seeing the Llama's come visit (that's right- live llamas!) and the greyhound dogs! We also really enjoy talking to folks who come by and talking to the other farmers. We love seeing families come and it's a great way for kids to learn more about where food comes from.
Posted by Turtle Bend Farm at 7:45 AM No comments: Links to this post

Email Marketing You Can Trust